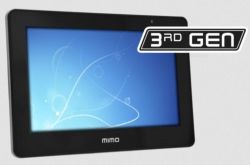 First, Mimo introduced the world’s first ever capacitive touchscreen USB 7” display. Mimo continues to raise the bar, introducing the 7” monitor with a VESA mount. In addition to the handy, sturdy VESA mount for wall, pole, and other elevated display configurations, the UM-760CF includes the same great features our customers have come to love. This lightweight display measures less than an inch thick and weighs less than a pound. It has it all, including the responsiveness of multi-point capacitive touch. The 7” VESA USB capacitive touchscreen display is well-suited for retail, consumer, industrial, manufacturing, or hospitality markets.

Here is a small sampling of the applications enhanced by the Mimo 7” VESA display: