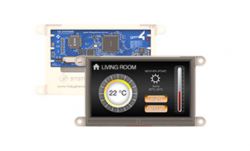 4.3" Gen4 Primary Display for the Raspberry Pi & ASUS Tinker Board

Communication between the gen4-4DPi and the Raspberry Pi & ASUS Tinker Board is interfaced with a high speed 48Mhz SPI connection, which utilises an on-board processor for direct command interpretation and SPI communication compression, and features a customised DMA enabled kernel. This combination allows this display to output high frame rate compared to other SPI display solutions, when displaying a typical image/video, and can achieve higher depending if the image can be compressed.

Mounting of the gen4-4DPi is achieved with the 4x 4mm mounting holes present on the Resistive Touch Display Modules, enabling standard screws to fasten the Gen4-4DPi as required, or via the adhesive supplied on the Cover Lens Bezel which is part of the Capacitive Touch Version.